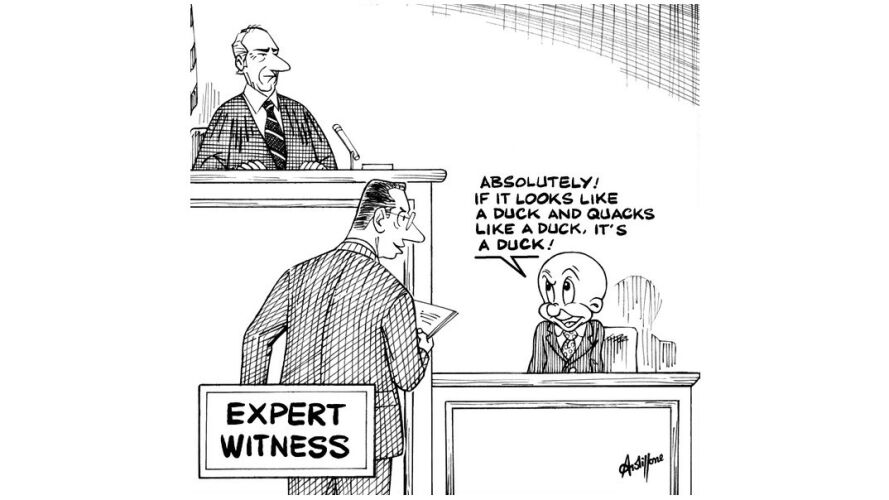 Most states apply the Daubert standard, the majority rule for admitting expert testimony.[2]  Prior to Daubert, and in some states today, courts apply a “general acceptance” standard under Frye.  The test is fairly straightforward.  For scientific evidence to be admissible, it must be shown that the methodology has gained general acceptance within the field.  For most states and the federal courts, this standard was replaced by Daubert – which has its pros and cons.  On one hand, Daubert can help ensure unreliable evidence is kept away from the jury, but on the other hand, it leaves a lot of discretion to the generally unscientific judge to serve as an information gatekeeper.

In a subsequent Supreme Court case, Kumho Tire Company, Ltd. v. Carmichael, the Daubert standard was extended to all non-technical or scientific experts as well. (In the Kumho case, the challenge was against a tire expert’s testimony).

What is the Daubert Standard?

The Daubert Standard is the majority rule for admitting expert testimony.  Encompassed in the Federal Rules of Evidence 702[1], the test governs what evidence is scientifically reliable enough to provide to a jury.  Generally, the trial judge must determine whether an expert’s testimony is relevant and reliable.  In Daubert v. Merrill Dow Pharmaceuticals, the Supreme Court held that expert testimony may be admissible if it is scientifically valid, which may be determined by applying the following factors:

So why doesn’t the Daubert Standard always apply to medical expert testimony then?

Medical experts make up about 40% of testifying experts at the federal level.[3] Medical experts are often called upon, especially in medical malpractice cases, to testify to the standard of care of a reasonable health care provider.  This testimony explains to juries whether an injury or death was the result of substandard care or just a negative outcome to a widely-accepted procedure.

Some of the most common medical testimony revolves around misdiagnosis, which can either mean a diagnosis that is incorrect or delayed such that the patient doesn’t receive timely treatment.  Other common medical malpractice claims include surgical errors and childbirth errors.  Generally, these claims will need an expert to testify that the health care provider who caused the injury acted with the degree of care, skill, and diligence that a physician would normally possess in such cases.[4]

Medical ethics require physicians to cooperate in the administration of justice. [5] The American Medical Association (AMA) offers its own guidance to medical experts needing to testify as witnesses: Physicians who testify as expert witnesses must:

This is of course from the AMA’s ethics guide and is not the legal standard for expert testimony.  Its language does bear some similarity to the Daubert standard, however.  Note the AMA’s call to apply current scientific thought that has been peer-reviewed and accepted by the medical community.

The standard most often applied instead is the “industry custom” standard.  The credibility of the witness depends on how familiar they are with standard practices in the industry.  Some courts have referred to this as the physician’s “learned experiences” or the “prestige factor.”[8]  Though Daubert’s language is not mandatory, Coscia argues that a standard Daubert rule for medical expert testimony would be preferable for several reasons:

For states that do apply the Daubert standard to medical evidence, what does this look like in practice?  Medical experts must now make sure their opinions are derived from published, peer-reviewed sources.  The physician’s experience alone is probably not enough to make their testimony admissible.  The expert witness must also be able to apply the generally accepted methodology to the case at hand.  This means each element of the expert’s theory of the case should be supported by this peer-reviewed research to be admissible.

Not necessarily.  One of the reasons states were so slow to adopt Daubert broadly was because judges did believe they were in the best position to determine what scientific evidence is reliable.  As of 2016, about a quarter of states maintained their expert testimony standards, which a Georgetown professor attributed to the fact that “Judges do not feel competent to decide what is good science, as Daubert commands them to do.”[10]  Determining the error rates, peer review, and acceptability led to “spongy” results and resulted in “cases [coming] out all over the place.”[11]

Daubert challenges do present an opportunity, however, to keep frivolous testimony out of a trial. Judges and juries usually do not have the technical knowledge to independently adjudicate the facts of a complex medical malpractice case, so they rely heavily on the testimony of an expert.  Coscia argued that in cases that declined to apply Daubert because it was “too extreme,” the admissibility had nothing to do with the substance of the testimony, but rather it turned on who the expert was (i.e., “their experiences, knowledge of industry custom, and similarity to the defendant.”)[12]  Ultimately, the goal of Daubert was to provide a procedural safeguard for parties to ensure conduct conforms to an objective reasonableness standard rather than solely on custom.  When this standard does not apply to medical experts, the legal system arguably plays a role in stunting medical innovation by setting the standard at “the way it’s always been done” rather than “the way it should have been done.”

Advancements in the PACER case